RUXT is a new band born in 2016 from the union of experienced musicians : vocalist Matt Bernardi (Purplesnake), guitarists Stefano Galleano and Andrea Raffaele (Snake, Rock.it), bassist Steve Vawamas (Athlantis, Mastercastle) and drummer Alessio Spallarossa (Sadist).
The band members decided to put together their previous experiences
and focus their energy in making a new album which would
represent their musical origins. They mix influences from bands like Gotthard, Dio, Whitesnake with a deep research of a personal sound.
Their first album has been produced by Stefano Galleano and recorded
at Music Art Studio of Pier Gonella (Rapallo, Italy).
Released end of 2016, december, by Diamonds Prod.

2017, October 27th was the release date of the second album for hard’n’heavy band RUXT, titled “Running out of time”.

The line up was the same which made last year the well acclaimed debut “Behind the masquerade”: Matt Bernardi (Purplesnake) on vocals, Stefano Galleano and Andrea Raffaele (Rockit, Snake) on guitars, Steve Vawamas (Athlantis, Mastercastle, Odyssea, Bellathrix) on bass and Alessio Spallarossa (Sadist, The Roommates) on drums.

Tracklist of “Running out of Time” was as follows: “Running out of Time”, “Legacy”, “In the Name of Freedom”, “Everytime Everywhere” (first single and video is out, with Pier Gonella from Necrodeath, Mastercastle, Vanexa as special guest), “Scars”, “Leap in the Dark”, “Let me Out”, “My Star”, “Queen of the World”, e “Heaven or Hell”.

Then, in the beginning of 2019, new third album has been released.

The Album, produced by guitarist Stefano Galleano, has been recorded, mixed and mastered at Steve Vawamas and Music Art of Rapallo studios with Pier Gonella.

It’s titled ‘’Back to the Origins’’ and contains 11 songs: Here and now / I will find a way / All you got / River of love / Be what you are / Train of life / Another day without your soul / Come back to life / Remember the promise you made / Tonite we dine in hell / Back to the origins. Former drummer Alessio Spallarossa has been replaced by Alessandro “Attila” fanelli. First single is “Here and now”. 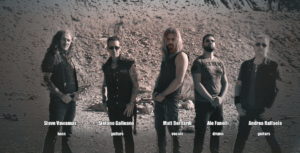