Athlantis is a band formed in 2003 by bass player Steve Vawamas (Mastercastle, Ruxt, Bellathrix, ex Shadows of steel).
Athlantis focuses into power metal sound, and first album self-titled was released by Underground Symphony, with Roberto Tiranti (Labyrinth), Pier Gonella (Matercastle, Necrodeth, Vanexa) in the line-up.
After a short period Tommy Talamanca and Trevor from Sadist, plus Alessandro Bissa (Labyrinth, Vision Divine) joined the band. Then Athlantis recorded in 2008 second album titled “Metalmorphosis”, an album that unfortuntely, it’s not been released yet…
In 2012 Steve recruited Pier Gonella and Giorgia Gueglio from Mastercastle, Francesco Ciapica, Enrico Sidoti, Alessio Calandriello (Lucid Dream), to release the album “M.W.N.D.”. An album with more hard rock parts. “M.W.N.D.” has been released by german label Ice Warrior Records.
In 2016 Steve entered Musicart Studios of Pier Gonella in Rapallo, Italy, to record the fourth album, titled “Chapter IV”. So, this is the new album for Athlantis, out for Diamonds Prod.
Current Athlantis line-up consists of:

Special guests for this release are: 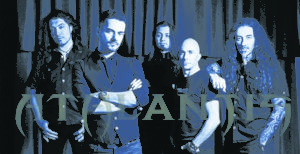