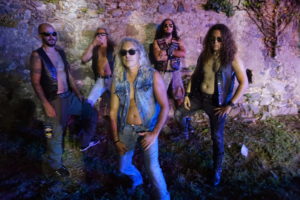 POWERDRIVE formed in 2013. First line-up composedsome tracks, to propose on stage with some covers. But after a short time, the band split-up.

So they reformed at the end of 2015 with a renewed line-up. And this time the intention of the guys was to make new tracks and working to a full-lenght album.

POWERDRIVE’s style is hard’n’heavy with various influences. We can listen to certain sound in the vein of AC/DC, Twisted Sister, Motorhead.

Then after a strong rehearsing, and some live gigs around Ligurian
area, in early 2018 POWERDRIVE were ready to enter a studio. So they spent some time at Blackwave Studios in Genoa (Italy).